Dave Cleland suffered a cardiac arrest at home, shortly after being treated for a heart attack. His wife raised the alarm and delivered CPR which helped to save him.

Dave describes what happened to him:

I’m Dave Cleland and I’m 54 and from Woodbridge. On Saturday Feb 13 this year I had a heart attack. 55 minutes into a virtual mountain ride at home I felt something like indigestion or heartburn. I completed the ride, did a warm down and then went to lie on my bed. Five minutes later, I still felt the same and thought I better called my wife. She in turn called a neighbour (who is a nurse) for her opinion. She did not like my colour and we called 999. I was rushed to the Royal Papworth Hospital in Cambridge and had a stent fitted.

At the time this was all quite worrying, however it all seems very trivial now, as the next week, Saturday Feb 20th, I had a sudden cardiac arrest at home and my wife performed CPR. 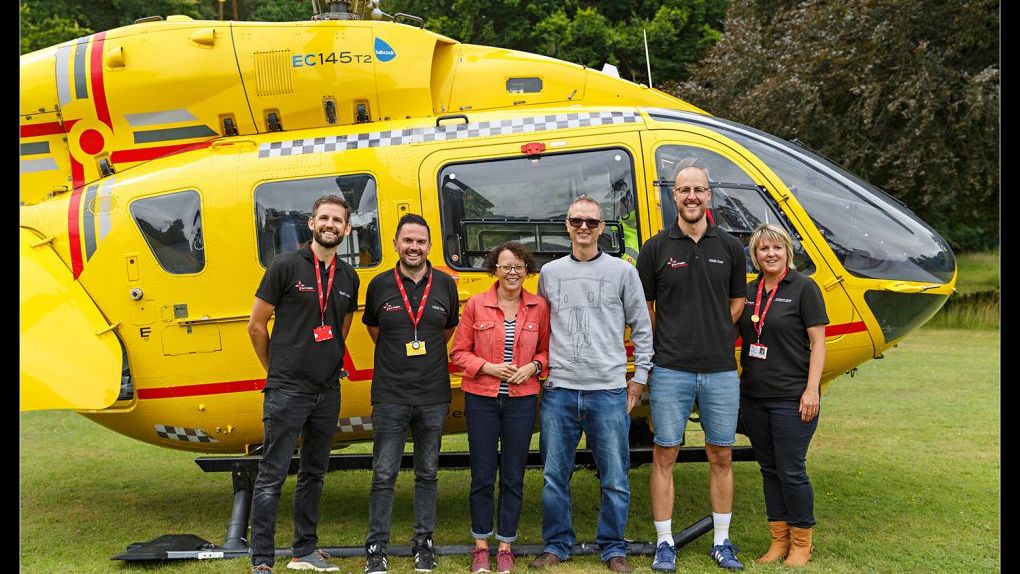 I got home from Papworth (for the first time) on Tuesday 16th and did not feel particularly bad. My son's birthday is on February 24th, so I wrote in my son’s card apologising for the shock I had given him the previous Saturday. This was quite ironic as by the time he opened it I had had the sudden cardiac arrest (again on a Saturday)! I ordered a pill box for my new meds and contacted my GP for a sick note, which I also collected. I generally went about other things as normal, albeit exercise and my daily three-mile walks were off the list.

My wife, Bernie, was signed up to take part in the St John’s vaccination programme, and on Friday 19th she had to complete her training. Part of this face-to-face session included CPR training. We debated her going and I said, “of course you should go, what is going to happen to me?”

In her case, this was a refresher, however the next day she had to put those skills to use!

The next day, Saturday, February 20th, early morning, we went to Waitrose and the butchers as normal and for the second Saturday in a row, this weekly routine ended up with me going to The Royal Papworth Hospital. I don’t really remember anything from the day but apparently, in the afternoon I had gone upstairs to have a rest and at some point, I had gone in to our en-suite bathroom. I cannot recall any warning signs or any pain.

Bernie tells me she heard a yelp followed by a loud thud. She called to me but got no answer, so she ran upstairs where she found me motionless on my front next to the bath. What seemed strange to her was that my arms where down by my side and not as if I had put them out in an attempt to brace a fall. Bernie ran downstairs to get a phone and called 999. She then got to apply her CPR skills on me, which happened within a couple of minutes with direction from the call handler.

In the background, the call dispatch handlers (James and Leanne) diverted the first paramedics (Kieran and Marcus) from another call, and they arrived within six minutes of receiving the call. A critical care paramedic (Liam), volunteering with SARS, arrived shortly afterwards. At some point another ambulance crew (Joshua and Christopher) and an on-scene coordinator (Fraser) arrived. At some point still later, the EAAA was alerted, and we ended up with a further team of three critical care experts (Nicola, Ben and James) in attendance.

The EAAA team informed us that they were treating me on the basis that the stent from the week before was blocked. I was shocked twice within my house before being carried out to the ambulance. I am told I started to show signs of regaining consciousness at this point and when I got into the ambulance, apparently, I started to try to get up to leave the ambulance and they administered ketamine to sedate me.

The trip from my house to the site where the helicopter landed is less than 2 minutes’ drive. I was then prepped and ventilated for the flight. I only know about this from having spoken to the teams involved. The EAAA team told us that as the particular helicopter being used was unmarked, one of the neighbours near the landing site came out to complain about why they were there, which is quite amusing.

The ambulance service team have praised Bernie for her prompt and controlled CPR and reiterated that this is why I have come out of this with such a good result. Sudden cardiac arrests normally don’t have a good outcome, especially when they don’t occur in a medical environment.

I now have an S-ICD device fitted, an internal defibrillator, to help if I ever suffer a repeat event. At least this way I would not be reliant on someone being with me to administer CPR. I was also given some additional drugs to help control my arrhythmia.

The second event definitely felt worse, and as a result the heart attack event almost feels minor or trivial, even though it is a significant event in its’ own right and likely the cause of the cardiac arrest.

My story is one where all the services and my wife worked together as well as possible and the result is a great outcome. I am now working with all the groups involved to promote awareness of the them and the need for CPR training, to help save more people like me. I have given several presentations and am pushing for more CPR awareness in my work (and to anyone else who will listen).