Total strangers, Charles Morris was driving in front of Dave when he noticed the motorbike behind him had disappeared from view. Worried something bad had happened, he turned his car around and went searching. This act of kindness would save Dave's life.

Every Friday, 29-year-old Dave Woodhouse would leave work early from his shift as a welder fabricator in Cromer, and travel home to his mother’s house before heading home to Cawston to see his partner Stacey and their three-year-old son.

On Friday 15 March 2019, Dave set off from his mother's in Briston on his motorbike, travelling on the back roads of the North Norfolk countryside. Dave remembers; “It was a wonderful sunny day and I was enjoying a lovely slow ride to my destination”.

At the time, Dave was following a car, not knowing then that the driver Charles Morris, would soon save his live.

“I had never met him, but I would soon be eternally in this man’s debt for what was to be the worst moment of my life.”

Both Dave and Charles were travelling at a sensible 40-50mph speed along the road when they approached a bend not too far outside of Briston; a corner Dave had taken many times. As he took the bend, Dave lost control of his motorbike.

He said: “We came to one of many bends in the road that doesn’t require too much thought when you know the road. I naturally and instinctively leant over into the corner when my front wheel slipped, on what I presumed to be some loose gravel, to avoid crashing down on my left side.”

“I then instantly sat up into my seat trying to bring the bike to an upright central position, so I could brake hard safely and hopefully come to a stop and regain my composure."

“Before I could come to a stop, I looked up to see there was no road left. All I remember was seeing a verge and a tree which I was about to hit and aimed the bike at a thick hedgerow instead.”

Dave came to a stop lying face down in part of a ditch and at the back of the hedgerow - and at this stage felt no pain.

He said: “As I lay there, I instantly knew I needed to somehow get to the front of the hedge to be seen by a passersby because my bike and I were obscured from view in the field. I tried with all my strength to drag myself through the hedge, but I was unable to move the lower half of my body. I realised at this point I was probably in a bad way and had broken my legs. All I remember pain wise was having a sore chest from where my body armour was digging in.”

Thankfully, Charles, the driver of the car travelling in front of Dave, was driving with the window open when he heard a scraping sound. He happened to notice that Dave was no longer in his rear-view mirror. Charles lives locally and had been a driving instructor, so knew the roads well.

Charles turned his car around, drove slowly up and down the hedge row shouting ‘hello’. He did this three times before he noticed Dave on the other side of the hedge. Charles called 999 and the police and an ambulance was immediately dispatched. Charles’ perseverance and vigilance undoubtedly saved Dave’s life. 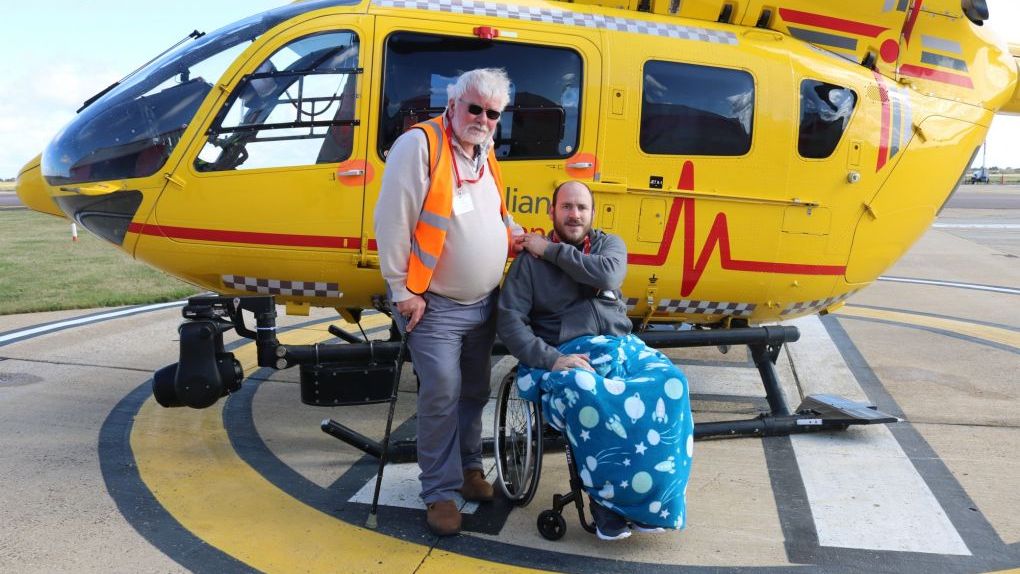 “The police told me I had travelled roughly 17 or more feet from the point of impact. I had gone straight through the hedge and it had snagged myself and the bike, sending us both up into the air and into a continuous flip until we both landed on the other side”

East Anglian Air Ambulance was dispatched shortly after from Norwich Airport at 17:23 and Doctor Sarah Fadden and Critical Care Paramedic Luke Chamberlain arrived at scene within 15 minutes, landing at 17:38. The crew provided enhanced care at scene, assessing Dave’s injuries, sedating him and packaging him for transport to hospital.

Dave remembers; “The air ambulance wasted no time in getting to me and took charge of the situation. They removed my helmet, which was at that point suffocating me, and cut away all my armour and clothing. They put me onto a spinal board, and I remember them being very kind and supportive when loading me on to the back of the helicopter. I jokingly asked if I could take it for a spin and was unfortunately denied!”

Dave was then flown to the Norfolk and Norwich University Hospital for further treatment. Dave’s injuries included a sustained life-changing spinal injury, and he was in hospital for a total of four months.

“The nature of Dave’s accident meant that getting him to hospital at speed was crucial to his recovery. Dave’s story has been an inspiration to everyone at EAAA. He was determined his life was going to move forward and despite facing the fact he was unlikely to walk again, he remained positive and focused all his attention on his rehabilitation.”

Dave’s recovery in his own words

At first, my recovery seemed very daunting and being heavily medicated was scary. Along with the vivid hallucinations and what, at the time, seemed like a very cold and claustrophobic environment in the high dependency unit.

Later, when I was more alert, I came to realise it was a fine ward with wonderful nurses. I was moved to Gateley Ward which became a second home to me, and I adored all of the nurses and members of staff I met there.

From there I went to Sheffield Hospital because it had a dedicated spinal injuries unit. I was there for a month to ready me for my new journey and to rehabilitate me back to normal life - or as normal as it could be.

I was in Norwich for three months so collectively was in hospital for a little over four months, in all. It was supposed to be six months to a year, but thanks to my friends and family and ongoing support from the police and air ambulance, I was always very high in spirits and that, I believe, helped me heal fast.

I am thankful to have been given a second chance at life and would love to give something back. So, I am hoping to work with the East Anglian Air Ambulance more and help raise the funds to do what they do best and raise awareness for them. Other than that, I am a man of simple pleasures and I look forward to my life with my little boy and future wife and a bit of cheeky video gaming in between!