On the 7th August, Harry Sage, an 18-year-old apprentice fabricator from Sudbury, was in a horrible accident. He was working in a steel factory near Newmarket and had come in on his day off to help get a project finished when he literally came inches from death. 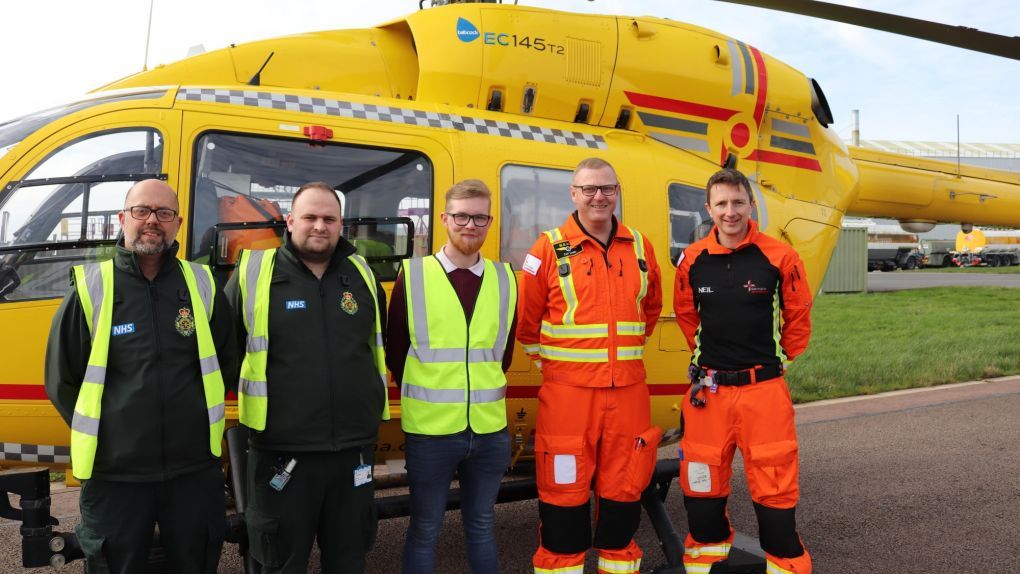 Harry got in a forklift to move a palette across the factory, something he had done several times, when he collided with an 18 metre long steel beam which was being moved across the factory, weighing two and a half tonne. The edge of the metal beam protruded through the cab of the forklift, striking Harry across the face and mouth, breaking his jaw.

As he ducked out of the cab with lightening quick reflexes, the beam whipped off his hard hat, cutting him along his scalp from the top of his forehead to the base of his neck. Somehow, he freed himself from the cab, breaking his collar bone as he hit the floor.  If the beam had struck him anywhere else on his head or neck, he almost certainly would have died from the impact.

Colleagues rushed to Harry’s side and immediately called 999 at 15:06. An East of England Ambulance Service (EEAST) team, consisting of Anthony Joslin and James Bugg, were first on scene. Harry’s head and facial injuries were very severe, so they quickly radioed for the East Anglian Air Ambulance team from Cambridge for support. Flown by pilots Rosh Jaypalan and Eduardo Prato, the Anglia Two crew were on scene at 15:54, just 14 minutes after taking off from the EAAA base, prepared to administer an emergency anaesthetic and take over Harry’s breathing.

However, when Doctor Neil Berry, Doctor Abs Singh and Critical Care Paramedic Carl Smith arrived, Harry, who couldn’t speak due to his injuries, was quite calm and indicated that he felt no pain. From their assessments, Harry did not require advanced sedation and could be transferred to Addenbrooke’s Hospital by road, with the EAAA team by his side to monitor his condition.

Harry was desperate to communicate with the medical teams, and motioned for a pen and paper, on which he wrote: Die?

Although Harry’s injuries were some of the worst the team had seen, Doctor Neil Berry was able to confidently tell Harry: “No, not today. We’re going to get you to hospital and you’re going to need surgery but no, you’re not going to die.”

Harry was in Addenbrooke’s Hospital for 12 days after the accident. He needed multiple operations to repair the damage to his jaw, mouth, palate and lips and he needed a tracheostomy to help him breath due to the swelling in his mouth and throat. 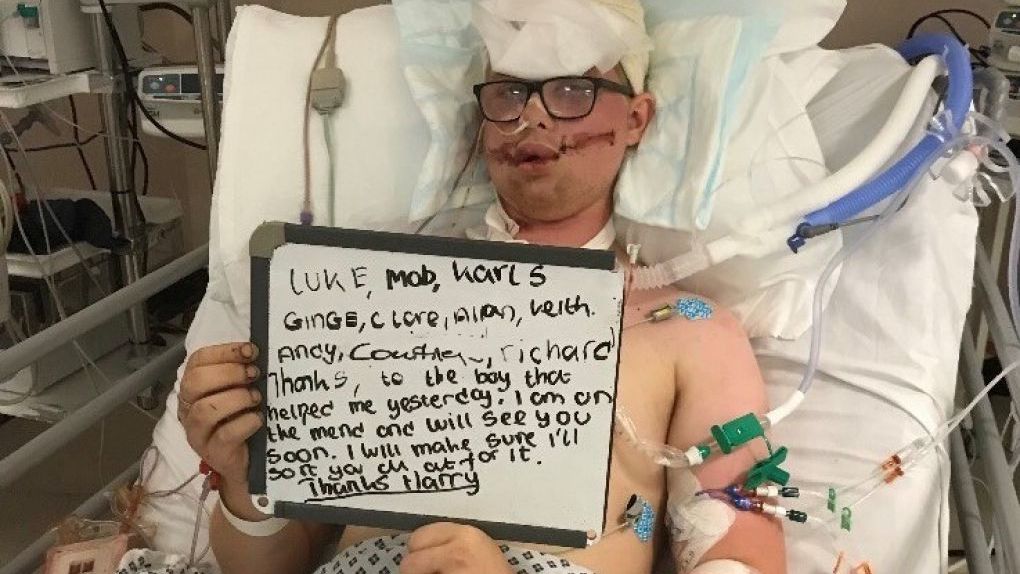 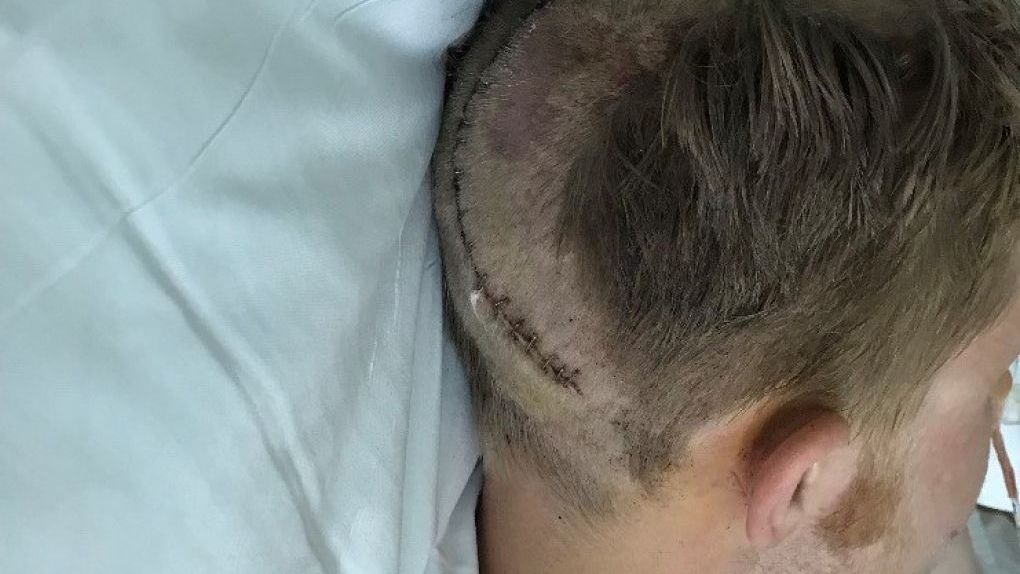 The injury to his scalp needed 46 staples; the surgeon said it was one of the biggest head injuries he had seen. He also needed surgery to fix his collar bone and had additional injuries to his neck and chest. Whilst in hospital, EAAA Critical Care Paramedic Carl Smith, who was very moved by Harry’s accident, visited him to see how he was doing.

Seven months later, to look at Harry, you would never know how bad his injuries were. Or that he still needs a bone and muscle graft to repair all of the damage to his palate and jaw. Harry is still having several hospital appointments a month and counselling to help him deal with the trauma of the accident. However, Harry has already taken several steps towards his recovery, such as visiting the scene of the accident.

A major part of Harry’s recovery has been having the opportunity to meet the teams who treated him and to say thank you in person. Harry got this chance when he and his family visited the EAAA base in Cambridge on 4th March.

“I can remember a lot about the accident and the people who helped me. I know my accident was quite a significant one for the crews involved so it means a lot for me to be able to show them how I am now. The EAAA Aftercare team have been incredible and arranged getting the ambulance and air ambulance teams who came out to me together so that I could say thank you in person. That means more than I could ever say.” 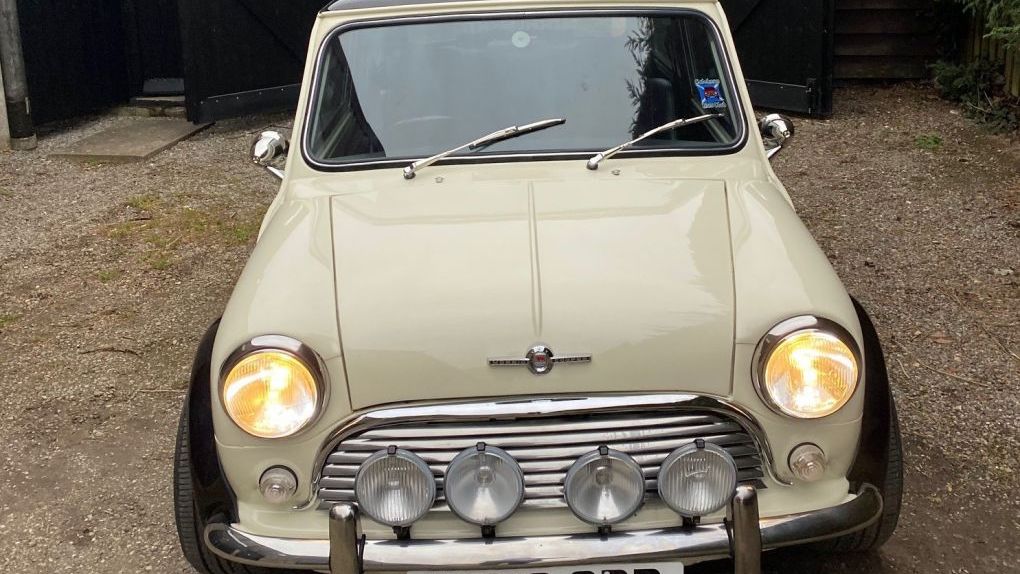 Since his accident, Harry has been concentrating on getting better. Harry continued: “The hardest thing for me has not been the physical injuries but the tiredness and slowly being able to get back to some sort of normal. I think perhaps because I needed so many different operations, and had so much healing to do, it really took it out of me physically and mentally. But I’m feeling a lot better now and am looking forward to a time when I know I won’t need any more surgery.”

Harry has been keeping himself busy by getting a puppy and buying a classic mini and is concentrating on spending quality time with his girlfriend and family, who have supported him throughout his recovery.

James Bugg, an apprentice emergency medical technician with EEAST, said: “This was a fantastic example of teamwork between medics at EEAST and our colleagues at East Anglian Air Ambulance. By working closely together, we were able to ensure that Harry received the prompt treatment he needed which may well have saved his life.

“We are really pleased to be given the opportunity to meet Harry again earlier this month and were delighted to hear that he is doing so well. We wish him all the best for his continued recovery.”