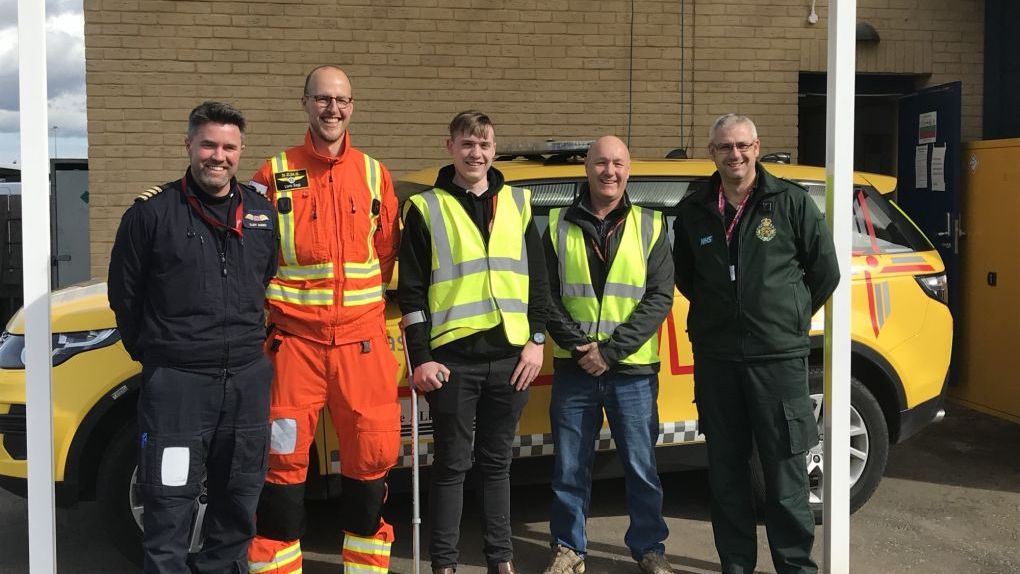 On one of the hottest days of 2018, 21-year-old Jonathan Waddingham and his colleague Tim Harrington were working on an irrigation system on a farm just outside Newmarket. Without warning, part of the irrigation kit suddenly exploded, catching Jonathan in the chest and immediately bouncing to his hip.

Jonathan fell to the ground, blood pouring from his chest and hip, although he was still conscious. Tim’s instinct was to stop the bleeding. He grabbed what he could of Jonathan’s t-shirt and rolled it into a makeshift dressing for Jonathan’s chest, and then called 999 at 15.29.

Anglia 2 were activated at 15.45 but the initial difficulty for pilots Elliot Haines and Dave Kelly was to locate the scene of the incident, as Tim and Jonathan were sheltering from the sun under a tree. At 16.08, the helicopter landed and CCPs Liam Sagi and Chris Neil, together with Dr Ed Gold, were able to assess the extent of Jonathan’s injuries. He had a massive hole in his leg, with his right lung exposed to the air. Dr Gold sedated Jonathan and the team transferred him via helicopter to Addenbrooke’s Hospital. Upon arrival at the Emergency Department, Jonathan had an immediate blood transfusion and underwent eleven hours of surgery.

Astonishingly, Jonathan survived. He visited CCP Liam and pilot Elliot at EAAA’s Cambridge base in March, and both were amazed to see him walking into the crew room. Jonathan’s sense of humour and selfdetermination were big clues to the success of his recovery, as well as his occupational therapy and counselling. Although he has not yet returned to work, Jonathan has been asked by his old college to give talks on the importance of health and safety and dangers associated with agricultural work.

Jonathan plans on getting a tattoo with the words: "Saved by EAAA, Addenbrooke's and Tim".