Meet Paul and Jill Shattock. Paul Shattock is one of very few people who has been helped by the East Anglian Air Ambulance, twice.

Paul Shattock is one of very few people who has been helped by the East Anglian Air Ambulance, twice.

Paul’s definitely one of the only people we know who’s needed our air ambulance twice within two weeks! In our book, that makes Paul a very, very lucky man.

In July 2017, Paul suffered two cardiac events at his home near Fakenham.

The first was early on a Saturday morning. Paul and his wife, Jill, had been socialising the night before and at first Paul thought he just had indigestion. He got up to make a cup of tea and got back into bed.

Minutes later, his breathing changed and then he stopped breathing and went into cardiac arrest.

Jill, who fortunately for Paul is first aid trained, immediately noticed Paul’s unusual breathing (known as agonal breathing) and quickly sprang into action performing CPR. Jill’s parents were visiting and she was able to call out to them to ring 999.

An ambulance, rapid response vehicle and air ambulance were quickly dispatched. Jill did a fantastic job of continued resuscitation until more help reached them. The medical teams, including EAAA Doctor Tobias Gauss and Critical Care Paramedic Chris Neil, worked together to provide enhanced critical care, including using a LUCAS machine, which is a mechanical chest compression device. They also administered medication to break down a blood clot, which can only be given by a Doctor.

Once Paul was stable enough he was flown, with Jill, to the Norfolk and Norwich University Hospital. It would have taken over an hour to get there by road.  Surgical teams identified the blocked blood vessel in Paul’s heart and resolved it by inflating a small balloon. Paul was in intensive care for several days and in hospital for a week.

Just a few days after being home, Paul suffered another cardiac arrest, following a second heart attack – 11 days after the first one. Jill had been out walking the dog, when in another odd twist of fate, she returned to the house just as Paul collapsed. Again, Jill started performing CPR. This time she was at home alone and had to juggle CPR with dialling 999.

This time the cardiac arrest was a lot more serious as Paul was so weak. Luckily, when the air ambulance crew arrived it was the same doctor who had treated Paul before, Dr Tobias Gauss, with Critical Care Paramedic Tim Daniels. Knowing Paul’s history, they were able to quickly recognise that Paul’s artery had re-clotted.

It was incredibly difficult to treat Paul as his heart had been through so much and his veins had shut down, but the HEMS team did everything they could and fortunately stabilised Paul enough to fly him to hospital again.

Paul needed a stent, temporary pacemaker, then a permanent pacemaker and an ICD (internal defibrillator) fitted. Paul had a lot of trouble maintaining his heart rate and every time it dropped he went into VF (an abnormal heart rhythm) and needed to be shocked again, which is why he needed the ICD. In total, Paul had 44 episodes of VF and was in hospital for a long time.

Eventually Paul returned home. Somehow, he had survived both cardiac arrests and started his recovery process again. It became clear that he would need a long time to recover, so he chose to retire early from work. He set himself achievable goals, like starting to drive again, getting fit enough to walk the dog (and eventually get another dog) and then to play cricket again.

It’s taken him a long time, but he now feels fit and confident again. This summer he and Jill went on holiday abroad, with Paul taking his first flight in two years.

Jill, and all the medical teams involved in Paul’s care, did an amazing job of saving his life. Twice. 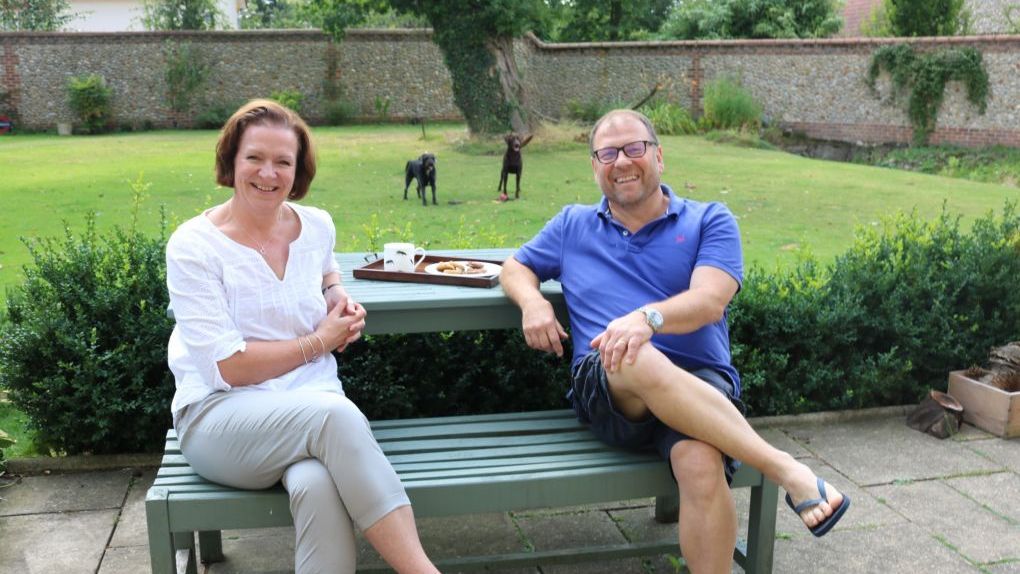 Paul’s first cardiac arrest happened very early in the morning. As we’re not currently operational 24/7 by helicopter, Paul was very lucky that we had just come online at 7am when we were tasked to him.

If Paul had collapsed just hours earlier, our night shift team would have responded to him by rapid response vehicle, providing the same care and equipment. However, Paul would have had to go to hospital in the road ambulance. From Paul’s home in Fakenham, this would have been a significant drive at a time when every minute counted. By flying 24/7 from the end of next year, we’ll be able to help many more people like Paul. However we will need to raise £13 million a year to do so.