On 18th May 2017 Jordan Greenwood was involved in a horrific motorcycle incident that resulted in the amputation of his lower leg. This year he will take part in our Only The Brave mud run on 7th April. Jordan has been a huge inspiration to us at EAAA and has been the motivation for many of the charity’s crew and staff to take part in the event too.

Only The Brave is our super-gruelling, super-muddy obstacle course challenge. The ever popular event at Elveden Estate is set to take place on Sunday 7th April 2019, and provides both a 6 and 10 mile course, with 20-35 obstacles, lots of mud, slides, straw bales and challenging hurdles.

Jordan Greenwood was travelling along a road in Thetford on his motorcycle when a car turned right across his path and into him, throwing him from his motorcycle, causing a serious crushing injury to his right foot and ankle. EAAA’s Anglia One crew was activated at 14:43 and pilots Steve Norris and Joe Abbott landed on scene at 14:59, just 16 minutes after being tasked. The clinical team that day was Doctor Victor Inyang and Critical Care Paramedic Simeon Tomlinson. 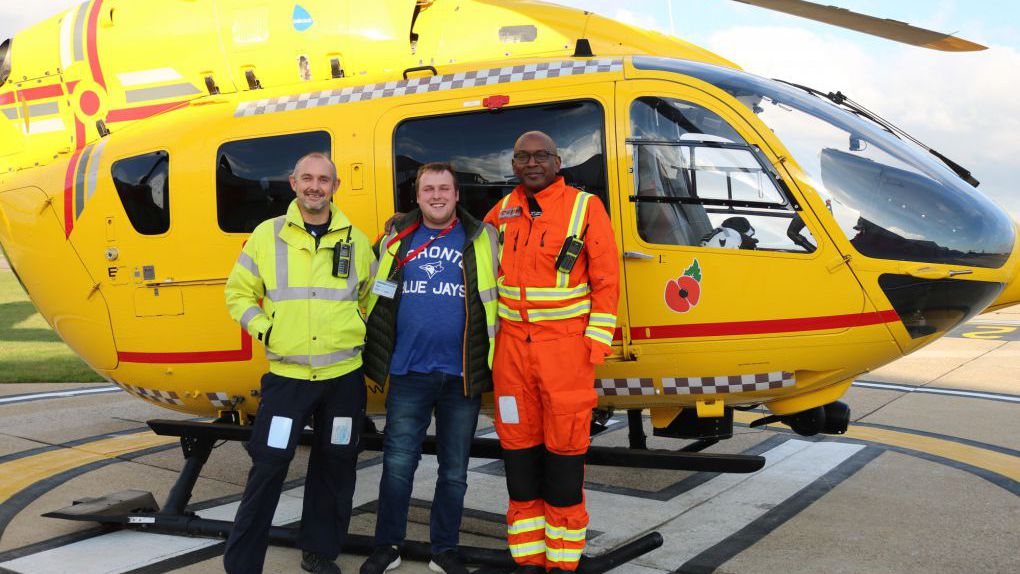 It quickly became obvious to the team that Jordan had suffered a horrific injury and was in a lot of pain. They administered sedation and pain relief and placed his injured leg in a splint. Jordan was then airlifted to the Norfolk and Norwich University Hospital, arriving at 16:04.

Despite the care that Jordan received, the hospital team was unable to save his injured leg and the lower half of his leg from the knee was amputated. To suffer such an injury like that would be devastating for so many people, but Jordan has gone on to show that he can do everything he did before and so much more. Jordan has recently had a new prosthetic limb fitted and has decided to take on the ultimate challenge – signing up for our gruelling mud run event Only The Brave.

Jordan said; “I would like to thank the air ambulance for helping me, and I would just like to say that this has opened up so many opportunities that I would never have thought of before, like being a casualty to help train the military and playing an injured soldier on TV. Nothing is impossible if you put your mind to it.”

Aftercare Manager, Alison Brett, said; “When Jordan came in to meet the crew who treated him, his positivity shone through and we were all in awe of his determination to not let his incident stop him from doing anything. Patients like Jordan become a huge inspiration for all of us at EAAA, in fact this year more of our crew than ever before have signed up to Only The Brave, myself included, and I can’t wait to run alongside Jordan and see him take on his next challenge.”

Tickets for this popular event are selling out fast and standard rate tickets end at 9am on Monday 11th February so be sure to get your entry in quick. We are asking participants to let us know via our dedicated OTB Facebook page ‘Only The Brave Races’, what has inspired you to take part using the hashtag #What’sYourObstacle. To find out more about how you can get involved please visit www.eaaa.org.uk/events/onlythebrave or email .(JavaScript must be enabled to view this email address)