On the 9th February 2018 Anglia Two was tasked to a three-year-old girl named Annabel, who had sadly suffered a cardiac arrest at her pre-school.

On 9 February 2018 our Cambridge team members were familiarising themselves with one another as it was the first shift for Dr Jon Barratt. Jon, Dr Victor Inyang, Supervising Consultant and Critical Care Paramedic Chris Neil were undertaking a moulage and running through kit details with their new team member. The red phone rang at 09:49 and the team was tasked to a three-year-old child in Ipswich in cardiac arrest. Seventeen minutes later pilots Gavin Blake and Olly Gates landed the helicopter in the garden adjacent to the Pre-school the young girl attended.

The team had been advised that a three-year-old girl was in cardiac arrest and chest compressions were being carried out on scene by pre-school staff.  How the patient had become ill was not clear, although there was some suggestion it might be due to a fall.

When the team arrived they were relieved to see that early bystander CPR by Pre-school staff and the interventions of the ambulance crew had resulted in a return of spontaneous circulation (ROSC). They were told that their young patient was called Annabel Brightwell and she had collapsed during morning play with her friends.

Despite a successful resuscitation attempt, she was deeply unconscious and her airway was compromised.  The team gave her a general anaesthetic in order to protect her airway and breathing.  It is incredibly rare to anaesthetise a young child outside of a hospital so the team carefully modified drug dosages based on her age and weight.  Specialist paediatric airway equipment was prepared and checked.  It took the team just sixteen minutes to complete the process.  After gaining control of Annabel’s airway the crew made the decision to fly her to Addenbrooke’s, which is home to the regional paediatric intensive care unit, to get her to the best specialist treatment.  They opted to fly with Annabel’s Pre-school manager, as despite being anaesthetised the crew wanted to make sure Annabel was accompanied by someone who knew her. 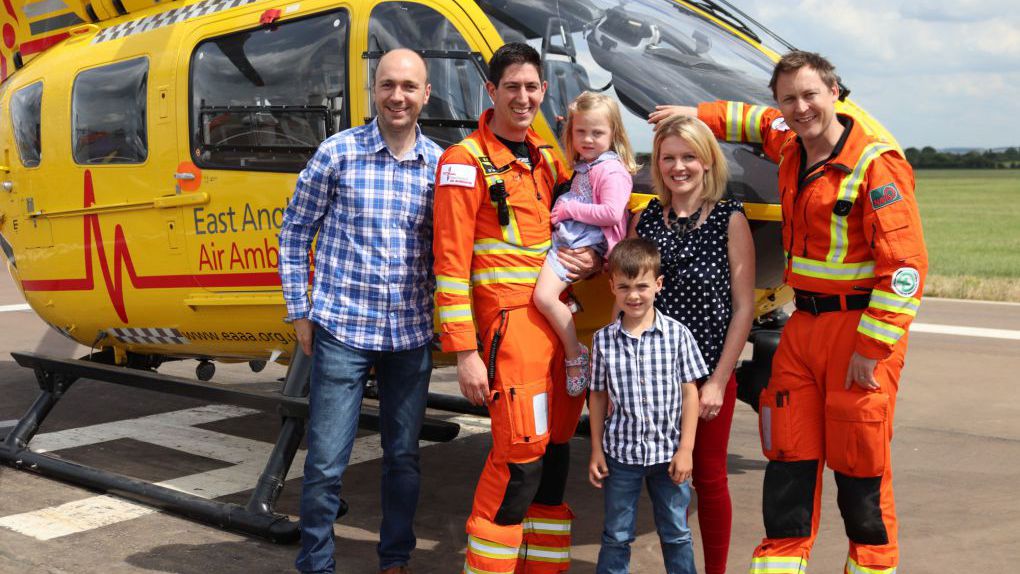 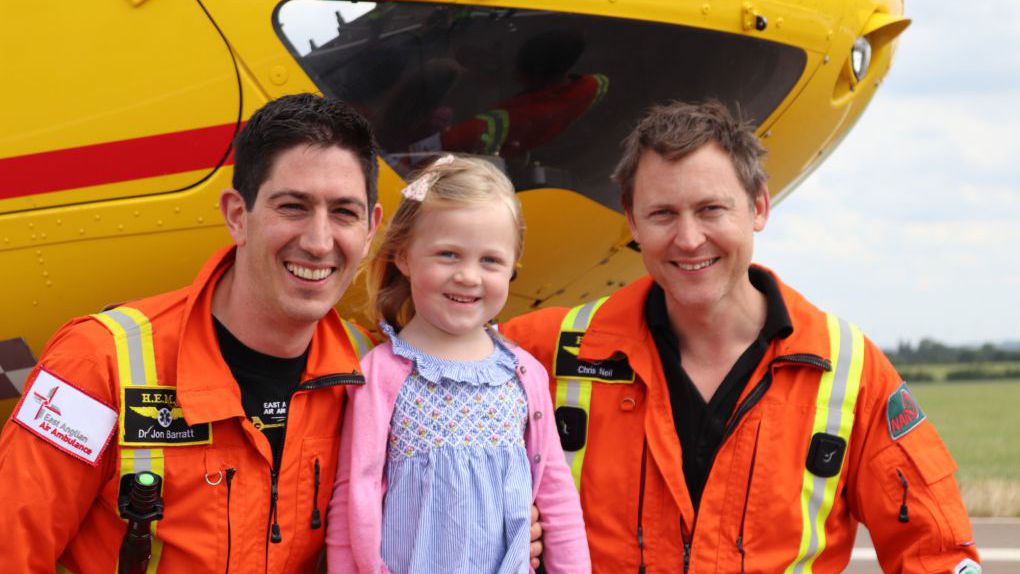 En route to hospital the team worked hard to stabilise her, but on the latter half of the journey Annabel deteriorated further and required intervention with specialist drugs.  The team gave ketamine to maintain anaesthesia and specialist drugs to protect and stabilise her heart.  This was all delivered at 1500ft flying at 125kts, around 144 mph in the Airbus H145 helicopter.

They were met at the hospital by the specialist paediatric resuscitation team; at this point Annabel sadly then went into cardiac arrest for a further two hours.  It was clear the team were definitely not dealing with ‘just’ a head injury and were battling with something entirely different.

The team stayed in the resus department to monitor Annabel’s progress.  They witnessed her father arriving and discovered that her Mother was receiving treatment in another hospital.  They spoke with the police and liaised with the doctor at the hospital she was staying in to have her transferred under blue light police escort to Addenbrooke’s to be with her family.

EAAA’s Aftercare Team stayed in touch with the family during her onwards treatment at The Royal Brompton, a specialist hospital in London, and helped to debrief the events of that day at the appropriate time.

Annabel was later diagnosed with the incredibly rare heart condition, catecholaminergic polymorphic ventricular tachycardia. This is triggered when an increase in adrenaline causes a specific arrhythmia in the heart leading to a cardiac arrest, while in hospital Annabel also had an operation to allow for less adrenaline to go directly to the heart in order to significantly reduce the chances of another cardiac arrest,  she is also on medication to control the condition.

The chain of survival was perfectly formed that day; it was undoubtedly the quick response, professional skills and outstanding patient care by everyone involved in a devastating situation that resulted in a lovely three-year-old girl being saved.  Everyone involved, including; the Pre-school staff, the ambulance crew, the EAAA team, the hospital team and the doctor who went above and beyond to get Annabel’s mother by her side helped to make a little girl well again.

Chris Neil, Critical Care Paramedic at EAAA, said; “On that day I was able to utilise all of my skills I have learnt in my 25 years working within PHEM.  The job was truly career defining.  It stretched my abilities, resilience and emotions and had the most amazing outcome.  Meeting Annabel a few months later was a special moment and one I will always treasure.”

Given Annabel’s age and presentation this mission was one of the most significant for our medical crew and it is with total awe we have watched her recover, grow and live a life that she deserves. The team were delighted to be able to meet Annabel and her family at the Cambridge base and show her the helicopter she was flown in. 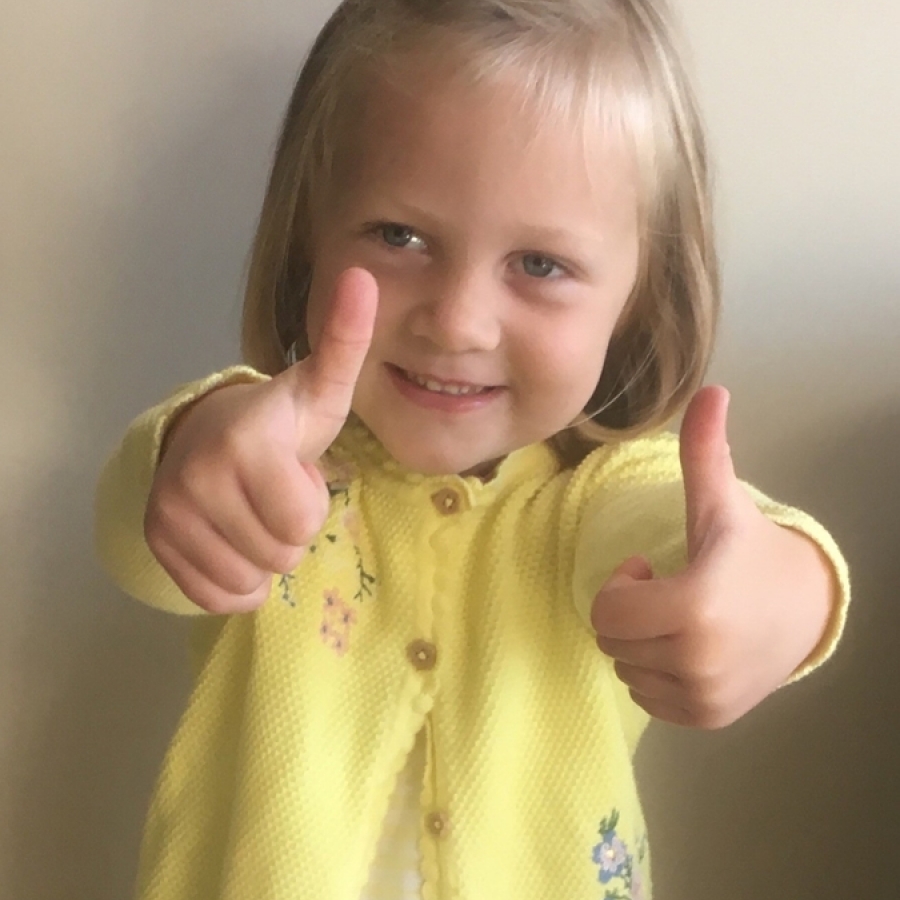 Rebecca and William, Annabel’s parents, said; “As a parent you never want to hear that your child is in need of emergency medical attention. Our world was shattered when we learnt that our three year old was being air lifted to Addenbrooke’s. Thankfully the EAAA played a vital part in our daughter’s chain of survival.The expertise, compassion and care they have provided during and after that unforgettable day in February, has enabled us to put into perspective how incredible and invaluable their service is. Being able to meet and thank the crew in person was a real privilege and a very memorable day for our family. We are forever grateful. Thank you East Anglian Air Ambulance, you really are true heroes.”