On the 16th September Carolyn and her husband were on a bike ride when Carolyn skidded on some mud and hit her head on the road.

On the 16th September 2017 Carolyn Skipper and her husband Richard were going out for a casual bike ride in Norfolk, something they did often for fitness. Carolyn was only cycling at low speed, but skidded on some mud and her bike slipped out from underneath her, causing her to fall and hit her head on the road. The hairclip she was wearing caused significant and lifethreatening injuries to her head.

The EAAA team of Dr Drew Welch, Critical Care Paramedic Rod Wells and pilots Luke Morgan and Joe Abbott was tasked to Ludham at 18:25, arriving on scene at 18:42. The land ambulance crew had already arrived on scene and were tending to Carolyn. She had suffered a serious head injury, was unconscious and had lost a significant amount of blood (between ½ – 1 litre of blood). Dr Welch quickly realised that Carolyn needed to have her scalp sutured on scene to stem the bleeding. This was a challenge due to her her hair being matted with blood.

With two sutures in, Carolyn had deteriorated to a GCS 4* and Drew and Rod made the decision to intubate Carolyn to take control of her breathing. Intubated and sutured, Carolyn was flown 30 minutes to Addenbrooke’s Hospital. During the flight the crew were seriously concerned that she may not survive her injuries. Carolyn had suffered a fractured skull and ribs, had bruised her brain, heart and lungs and suffered significant blood loss.

However despite a long recovery process, Carolyn made a remarkable recovery. Since her accident Carolyn has been in to meet the crew who saved her, and has now become a fantastic supporter and fundraiser for EAAA. For our Get Up and Go Yellow day Carolyn and her coffee house – The Chapel Coffee House – turned yellow for the day and raised a fantastic £1,150 for EAAA. 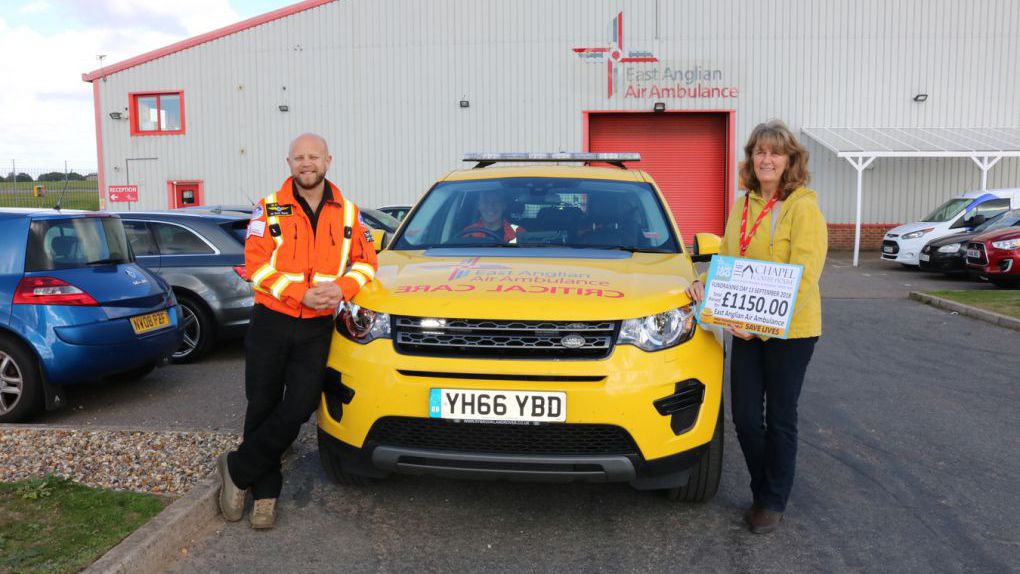 ““The fast response of EAAA flew the team near to me. They gave me intensive critical care on the roadside then the rapid transfer to Addenbrooke’s hospital, saving my life, for which I am eternally grateful.” ”

*GCS – Glasgow Coma Scale. This is used to describe a patient’s level of consciousness. The scale goes from 3 – 15 with 15 being the best the patient can be. A GCS of 3 – 8 means the patient is in a serious condition.