East Anglian Air Ambulance (EAAA) has been awarded the top spot in this year’s Best Companies list for the Charity Sector for its exceptional employee engagement and support during the pandemic. The charity has also been recognised as the 6th Best Company to Work For in the East of England in the 2021 listings and 14th in the Top 100 Mid-Sized Companies to Work For in the UK (for private companies and not-for-profits). 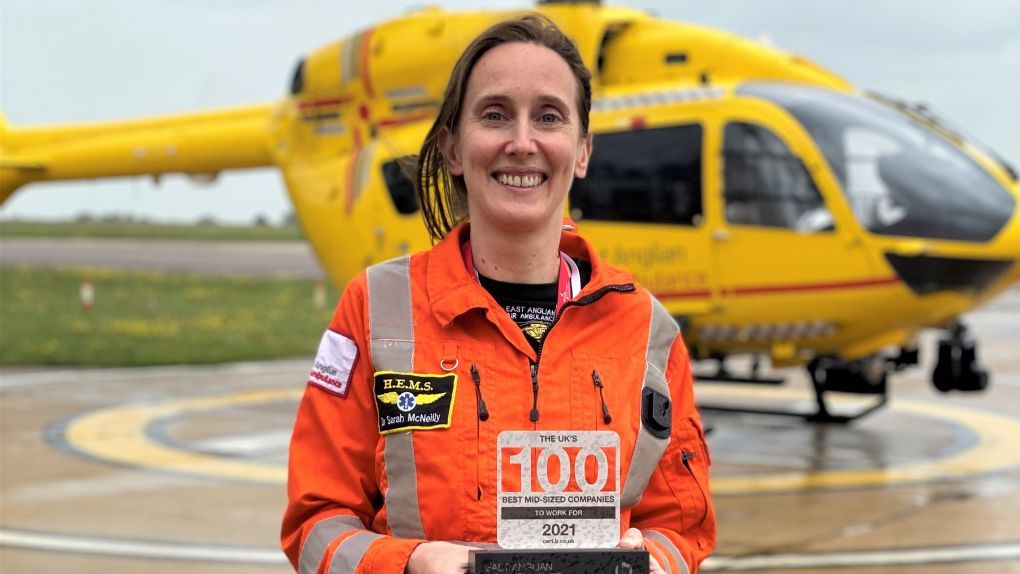 These national awards are based on the results of an employee feedback and engagement survey which feeds into regional, national and sector league tables. These fantastic results recognise the charity’s long-standing commitment to creating a fantastic place of work to support the life-saving organisation’s number one priority: delivering an excellent service for its patients. And that the organisation went above and beyond during the pandemic to support its staff, keep people connected and promote well-being.

“Whilst I have always believed EAAA is a very special place to work, having national recognition is something that means a huge amount. These awards, based entirely on staff survey results, give our supporters and patients the insight that our critical care is managed by a group of very special individuals who together form a phenomenal team. To be awarded the top spot in the charity sector means an incredible amount to all of us. Nothing we do would be possible without the fantastic community which keeps us flying.”

Sarah Atkins continued: “We managed to coordinate everyone in the charity watching the results online. I wouldn’t be surprised if air traffic control heard the whooping from the crew room when the first place was announced for the Charity Sector. Employee engagement is something that we’ve embedded into our DNA as we strongly believe that supporting and developing our staff ultimately gives our patients the best care possible. There is no team I would rather be part of and no service I would rather call on if the need arose.”

EAAA has maintained the Best Companies world-class, three-star rating for employee engagement, previously awarded to EAAA in 2019, when the charity last took place in the survey and was named 7th in the Top 100 Not for Profit Companies to Work For.

The charity has recently also won Employer of the Year in the Norfolk Business Awards (November 2020) and SME Cambridge Business Awards (April 2021), achieving both local and national recognition for its commitment to its staff and is setting a brilliant example for local employers and and not-for-profit organisations.